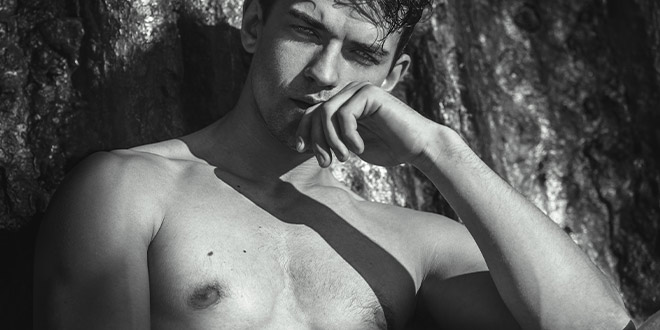 The Way We Met – A Gay Erotica Finalist Story

The last of the boxes unpacked had Max officially moved into Henry’s condo. The two sat down on the couch together, Max passing him a cold beer, tapped the neck of his bottle to Henry’s, “Cheers! To officially moving in together.”

“To us,” Henry replied before taking a sip. He let the cold lager slide down his throat and leaned against the man who’d become such an integral part of his life in such a short time.

“We’re celebrating tonight, and I know exactly how.” Henry watched as Max sat up to face him, excitement illuminating his face, making his light blue eyes sparkle. Max pressed a kiss to Henry’s lips before continuing, “Give me five minutes,” then he stood and headed to the front door of their apartment.

Henry stared at Max’s retreating form, “Are you… I mean, are we going to…?”

Max turned back from the open door and faced Henry, “Babe, it’s the last day of my lease, and I thought it would be fun if we relive that day. Think of it as a way to mark our new beginning. But the clock’s ticking, I have to have the keys in the super’s hand by six-thirty. I’ll see you out there,” Max gave him a wink before he shut the door and locked it behind him.

Five minutes later, his phone vibrated, and Henry inserted his ear-pod before answering the call.

“Make sure your hands are free,” Max growled through the line.

Henry shivered as he listened to his lover’s voice in his ear, so clearly, he could have been beside him though he wasn’t. “They are,” he hissed.

“Good, step out on the balcony. I’m waiting for you. In fact, just the idea of doing this with you again has me so fucking close already.”

“Wouldn’t dream of it, Babe, but you better hurry,” Max grunted, getting closer to his release.

Henry, already headed in that direction, emerged onto his private deck a moment later. Stepping to the railing, his eyes immediately locked on Max, where he sat on the balcony of his old place. Shirtless now, he wore only his basketball shorts, just like the night of their first ‘hook-up’…

On the last day of his lease on the apartment across from Henry’s, Max had planned a  special redo of the night they’d officially met during the pandemic lockdown, and Henry’s cock twitched with anticipation for the show he was about to receive.

Henry listened to Max’s words, painting a picture of the evening. Max first revealed that he knew Henry was watching him, how Max had known that Henry watched him doing calisthenics each afternoon when they couldn’t leave their homes.

Henry liked to watch. It was a bit of a kink for him, and he quickly realized that Max derived great pleasure from being on display.

Henry could feel the heat of the setting sun as he stepped onto the balcony, eager for the refreshing taste of the ice-cold beer he held, though he was even more eager for a glimpse of the hot, sweaty man-candy on the balcony below. He wondered what type of workout the man would do today. Tilting the bottle to his lips, the ice-cold liquid had barely touched his parched tongue when he heard a sound that had him moving to the railing of his balcony.

And just as the grunting gasp had predicted, there on the balcony diagonally below Henry’s was the sexy man Henry had been watching the past few weeks. Except for this time, it wasn’t the man doing burpees or lifting his dumbbells… this time the man sprawled on his lounger and his hand was rubbing the engorged cock beneath his shorts.

He gripped the railing tighter, peering down at the man pleasuring himself on the deck below. Stretched out on a lounger, and in nothing but a pair of black basketball shorts, Henry watched the man’s hand flex beneath his waistband as he stroked himself.

Henry pried his eyes away from the man’s crotch for a moment to take in the rest of him, but the angle of their balconies blocked his face, and if Henry moved further back, the man would undoubtedly catch him spying. Instead, he would be content with what he could see.

Henry’s eyes traveled over the tattoos covering muscular shoulders to a broad chest with a sprinkling of dark hair between his well-formed pecs that then tapered to a trail between his defined abs, disappearing beneath the shorts where his hand moved eagerly up and down.

Henry set his forgotten beer aside to grip the railing with both hands, daring to peer over it just a touch further to watch the show the man below unknowingly put on. He licked his bottom lip, wishing he were licking the salt from the man’s skin. His own cock sprung to life beneath the grey joggers he wore.

Henry let out a soft gasp as he watched the man’s movements quicken before he gripped the waistband of his shorts  with his other hand and yanked them down, exposing the thick, meaty cock thrusting through the man’s grip. Henry pressed his hand against his now rock hard dick, squeezing his length through the cotton of his pants. Damn, he thought, it wasn’t just him that was going stir crazy during this lockdown.

Henry swore he could feel the sexual energy radiating off the man on the balcony below when he suddenly sat up on his lounger and brought the rest of his face into view. Henry locked eyes with the lightest blue ones he’d ever seen. He gasped, frozen in place as he was caught spying…

Still, the man continued boldly stroking his cock while gazing up at Henry.

And yet Henry remained frozen in what he now realized was a feeble hiding spot. He watched the man use his free hand to put an ear-bud in his ear, then held up his phone.

“You have your phone with you?” Henry gave him a nod.

Henry’s thoughts were racing a mile a minute. ‘He wants my number… wait am I actually going to give it to him? After this man possibly teased me intentionally with his sweaty exercising for the past three weeks, you better believe he was getting it.’

A few seconds after Henry called it out to him, his phone vibrated on the table beside him with an “unknown” caller flashing across it. Henry swiped a shaky finger across the screen and raised the phone to his ear.

Henry sucked in a sharp breath. My god, this man was bold, he thought. “I suppose I should tell you mine and give you the same courtesy when you do the same… I’m Henry.” He told him, deciding to be equally bold.

“Henry…” Max groaned his name as if testing the feel of it on his tongue.

Henry’s eyes stayed glued to the movement of Max’s hand as he jerked his cock, running his thumb over the tip and collecting the precum gathered there. He then brought his thumb to his lips and sucked it into his mouth, groaning at his own taste, all while keeping his eyes locked on Henry’s.

“I couldn’t take you watching me anymore and I just had to do something about it. If it weren’t for this fucking quarantine lockdown, I would have knocked on your apartment door weeks ago.”

“You would have?” Henry, shocked by this whole situation, didn’t even try to hide the emotion from his voice.

“One-hundred percent, and if I keep listening to that sexy voice of yours, I’m going to blow my load any minute.”

“Do you want me to stop talking?”

“Well, what do you want me to do then?” Henry asked.

Max’s light blue eyes sparkled in the setting sun when he demanded, “Tell me what you have been looking at for the past three weeks and touch your cock while you do it.”

Henry swallowed over the lump of nervous anticipation. Was he really going to do this?  Looking at Max, he continued lazily stroking his cock, waiting for Henry to decide. Funny enough, it made Henry’s decision easy. Fuck yes, he would.

Henry took a deep breath and said, “I would watch your muscles flex as you moved, and the sweat trickle down your naked torso. I would listen to you grunt while you lift your weights and wonder if you would grunt like that when you thrust your cock into someone for the first time.”

“Is that the sound you make?” Henry whispered.

“That depends…” Max answered with a sly smile gracing his lips. Henry watched him reach his free hand down to cup and tug his balls. He groaned and thrust his hips up, pumping his dick through his tightly formed fist.

“Depends on what?” Henry demanded, not taking his eyes off the scene below.

“I guess it depends on whether I am the one doing the fucking or the one getting fucked.”

It was Henry’s turn to let out a groan. While they’d been speaking, his hand slipped beneath his own waistband and now stroked his length with the rhythm Max set.

“How close are you?” Max demanded.

“Tell me more,” Max’s hand moved faster up and down the length of his cock, making Henry stroke his faster.

Max licked his way up Henry’s body. “I hope you enjoyed the show as much as I just enjoyed my snack,” he said, his face just above Henry’s now.

Henry finally cracked open his eyes to peer at the man hovering above him. Cupping Max’s firm jawline in his hands, Henry replied, “I can’t believe we…” His brown eyes searching Max’s bright blue ones as he trailed off.

“Yeah, I couldn’t think of a better way to celebrate the last night of my lease and the first night of us living together than by re-enacting that first night.”

Henry studied Max as he continued to hover above him. He pulled Max’s face towards his, and just before he pressed their lips together, he said, “I fucking love you, Max.” Henry deepened the kiss, tasting himself on Max’s tongue.

“And this time is so much better,” Henry continued against Max’s lips.

“Because now we can do this?” Max asked, pressing his body flush against Henry’s, making them both groan.

“Yes,” Henry hissed against Max’s lips, “But now we get to do so much more.” Henry wrapped his arms around Max, making room for him between his muscular thighs, grinding his thick cock against him, ready for another round. But this time, it would be a much more up-close and personal kind of fucking…