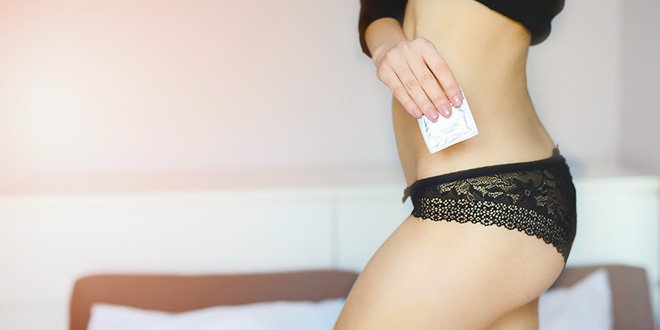 What good is using a seatbelt if you don’t put it on correctly, or a helmet that doesn’t fit? Similarly, what is the point of using a condom if you aren’t using it correctly? When perfectly used, a male condom is 98% effective at preventing pregnancy, but typical usage errors make that number drop down to 85%!

Here are 15 of the most common mistakes that are made when using a condom and how you can avoid them for safer, worry-free pleasure.

1) One Size Does Not Fit All

Just as an ill-fitting pair of shoes causes pain, so will too small a condom. (It’s worth noting that, despite ‘condom challenges,’ it can be uncomfortable to wear something that restricts blood too tightly on the penis, especially for an extended period of time).

Too large, and you’re likely to see slipping and leakage. Many men who find the first standard condoms they try uncomfortable automatically try the most well-known ‘XL’ condom brand, find them too big, and thus assume that condoms just don’t fit them. Rest assured, that brands and ranges vary when it comes to sizing, so they best bet (and most fun, in our opinion) is  to try as many different ones you can and find what suits you best.

The function of a condom is not simply to contain seminal fluid; it also acts as a barrier to pre-ejaculate as well as protects the sensitive mucus membrane of the user and their partner from passing bacteria and causing infections. Therefore, it doesn’t make sense to wait until after penetration or ‘rubbing’ to put the condom on; it should be put on before any genital to genital contact.

Do you always keep a bottle of wine in the cupboard or a case of beer in the fridge, just in case? This should be your policy―always keep a pack in your bedside drawer. Don’t wait until you have one left to restock either, because that leaves you out of luck if you’d like to have morning sex or if it breaks while you’re putting it on.

5) Not for Your Pocket

Condoms can last a quite a while…provided you store them under the right conditions. Keeping acondom in a wallet (assuming you put said wallet in your back pocket) for any extended amount of time is generally a bad idea due to the heat from your body as you sit, as well as the wear it may face from your movements. It’s best that everyone―ladies and gents―make sure to keep some in their bedside table and away from heat, light and moisture.

There are generally two types of people―those who throw food away the second it hits its expiry date and those who view ‘best before’ as a suggestion. We feel it doesn’t bear explanation which attitude you should adopt when it comes to the (quite generous) expiry dates on condoms.

While it’s easy to get caught up in a heated rush, it pays to take pause and make sure the condom has not been damaged during opening by a nail passing by, ring, etc. Why not have your partner assist in giving a thorough, sensual inspection?

Most condoms come pre-lubricated, but both you and your partner may appreciate a little more applied within and outside. If doing so, don’t go crazy and make the inside too slick or you may encounter slippage. As well, make sure to stick to water-based lubricants  as oil-based ones will degrade the latex.

It’s a classic mistake: trying to unroll the condom over the penis, only to realize you had it upside-down. While you may be tempted to quickly flip it over, even that brief contact with pre-ejaculate requires that you get a fresh condom. To avoid in future, try unrolling it slightly with your fingers first.

When you unroll a condom along the shaft, it must be completely unrolled to the very end. The base of the condom should reach that of the penis to prevent the condom becoming stuck within your partner.

Condoms are designed to be unrolled along erect penises, thus attempting to unroll a condom first, then put it on will result in difficulty that will cancel out any time you thought you were saving.

When you’re putting a condom on, it’s important that you squeeze the tip to keep air from getting trapped. Much like over-filling a balloon, if there is air in the reservoir tip, it may burst.

In the heat of the moment, when your hands may be sweaty or have lubricant on them, it may seem easier to tear open a condom with your mouth rather than using your hands. However, condom packaging is designed to be opened with your hands and only your hands; you risk tearing the condom if you use your teeth or any other sharp object.

The sweet embrace you share with your partner upon orgasm is a moment to be cherished, however it is not advisable to rest within each other for too long when using a condom. As the wearer loses their erection, the liquid may leak and it is possible that the condoms can get ‘stuck’ when they try to withdraw.

Everything Is Better Than Nothing

The worst mistake is obviously that of not using a condom at all, either when relying on condoms as a primary method of contraception, or when with a new partner (which includes when in an open relationship).