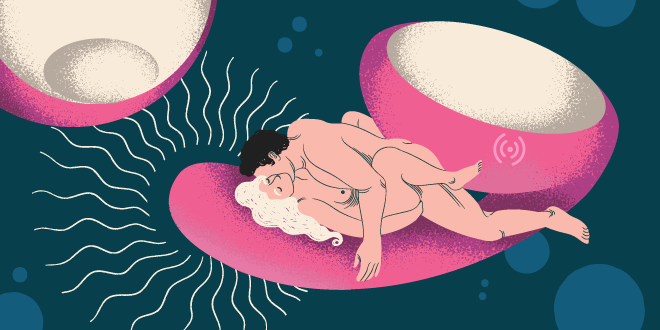 It was a heated and nearly frantic display as the couple spilled from the elevator doors in the early twilight hours of the morning. His hands gripped her thighs as she hooked one leg over his hip, the short black skirt she’d worn at the club nearly pushed up to her waist. He fumbled with the keys to their apartment as she tugged his shirt out of his jeans.

“I want you to fill me up,” she murmured into his ear.

He liked her this way; feisty and assertive, deliberately provoking him.

“I don’t know if you can handle what I have planned for you, dirty girl,” he teased as he lifted her up, her legs instinctively wrapping around him.

And she was. She had a way of matching his passions, eager to explore their boundaries. It kept their relationship vital and fresh.

In the bedroom, he pushed her up against the wall, impatiently stripping her bare. His eyes drank in every inch of exposed flesh as he pinned her wrists above her head. She was easy to restrain, while his other hand spanked her ass, warming her skin with a quick lick of fire. She defiantly arched her back, pressing into him.

“You’re going to be my bad girl, tonight aren’t you?”

“I’ll do anything you want,” she promised.

He ran his tongue down the length of her spine.

“Get on your knees.”

She arranged herself on the bed, swaying her hips, as she looked over her shoulder, tempting him with a dirty smile. “Like that?”

“Perfect,” he said, repositioning her upper body downward so that she couldn’t see what he had planned. “Don’t move. I want to enjoy this view.”

She waited for him obediently, wet with anticipation, as she heard the buckle of his jeans come undone.

She had expected that familiar feeling of being filled by him, but this time there was something different. Her body gave a little jolt of surprise as a combination of vibrations began to hum against her clitoris while the object inside her pulsed and rotated simultaneously.

“Mmm… and what do we have here?” she purred, feeling her body responding immediately. “God, that feels good.”

Her first instinct was that it was a tease, perhaps something new to add to their toy box, warming her up for him.

“Are you ready for more?”

He began to enter her, alongside the already pleasurable sensations created by the movement within. She felt herself stretch deliciously to accommodate all of him. It filled her up in a way she’d never experienced before, creating pressure against her G-spot that made her gasp.

“Can you handle it, dirty girl?” he teased.

Her moans signaled that she was more than ready for the challenge.

He leaned forward, placing one hand firmly on the small of her back, while the other held a round disc that guided the vibrations and rotations inside. The toy moved between them, stimulating them at the same time. As he began, her entire body shuddered with the impact of each long deliberate thrust.

She completely submitted to his control as he used the remote to vary the intensity. He would let the peaks rise and fall, building them up until she was begging him to let her climax before tempting her patience by prolonging it again. It allowed him to maintain his own pitch of excitement too. He wanted to feel her release at the very moment he gave in to his own.

“Is that the way you like it?” He could feel the muscles along her back quivering beneath his touch.

They built an easy rhythm, before he slowly began to increase the pace. She was so tight; it was exquisite. He knew by the way she was moving that she had given herself over to being filled completely. Attention was being given to every inner curve and pleasure zone.

His fingers twined in the tendrils of hair at the base of her neck, binding there, as he gave a gentle tug. “I want you to come for me, nice and hard.”

In that moment her body was his, and she was unable to resist the way he handled her, owning her desire, until it reached a feverish pitch.

He heard her lusty sobs and watched her back arch downward again, her hands clutching the sheets. The contractions set him off, squeezing the rotating arm of the toy between them. They came together in a mutually intense orgasm that drained their energies.

Slippery with sweat, they fell against the cool white sheets. The remote allowed the vibrations to slowly subside. It was a satisfying moment of rest, hands and lips lazily connecting, before their urgent passion play would begin again.