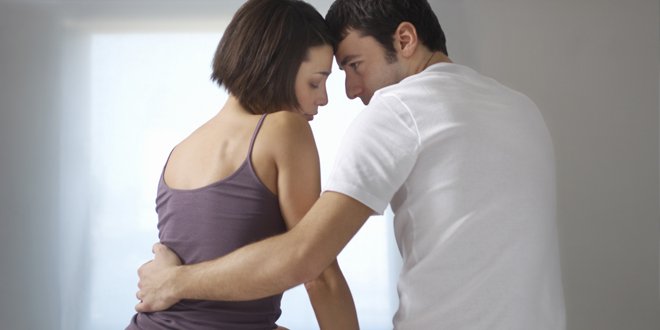 Maybe you’ve been here before. And if you haven’t, then one day you eventually will: you’re fooling around with a guy and you know you’re looking great, smelling great and feeling great. The room temp is just right, perfect lighting. In short – it’s about to go down. There’s just one problem: it’s not happening for him, erectionally speaking, and now you’re both feeling a bit deflated.

When it comes to responding or reacting to a partner’s impotence, there are some simple do’s, don’ts and things to keep in mind when you’re faced with this issue.

Don’t: freak out — it’s not about you

He knows what’s going on down there, and truth be told, it’s only exacerbating his issue. Chances are, he’s been hiding the fact that it’s just not happening for him because he’s so very in his head about it. There are so many factors that can contribute to the loss of an erection, one of the main ones being that we put so much damn importance on them working all the time, ready to go.

Going flaccid right as the main event approaches is all-too-common, and to put it on yourself isn’t just unfair to you, it’s inaccurate as well. However rather than asking if you’re the problem (you’re not), just remember that whatever negativity is roiling in your brain is much more multiplied in his right at that moment.

Do: chill out and change tack

Because his head is full of blaring klaxons and flashing lights, you can help ease the situation simply by saying ‘hey, let’s slow down for a minute’ or ‘how about you touch me for a bit?’. That second suggestion is key, because remember that a successful sexual encounter isn’t just about him getting off. A hard penis is definitely NOT the be-all and end-all of enjoyable sex, and he’ll appreciate the change in focus to your immediate needs.

Don’t: double down on the D

Do: expand your idea of sex

In hetero terms, sex doesn’t just have to be p-in-v penetrative intercourse, just like his orgasm isn’t what dictates a full and complete intimate interaction. As long as you both know how to take pleasure in a variety of ways (and there is a wide variety of alternate ways to give pleasure), then you truly never have to walk away from intimacy unsatisfied. In addition, science and technology are finally bridging the gap to pleasure, like in the F1S luxury male sextech console. It’s 10 sensors can help track performance and stamina to help us better understand what’s going on downstairs.

Don’t: let him use it as an excuse

It’s true that some guys will blame their sudden impotence on a condom, which to be fair, can lessen his sensitivity a teensy bit. In which case, I suggest to all guys to carry their favorite condom brand in order to be using the right one for them every time. In the case that he is using this temporary setback as an excuse to not wear a condom altogether, forget that guy; he can take his issues elsewhere.