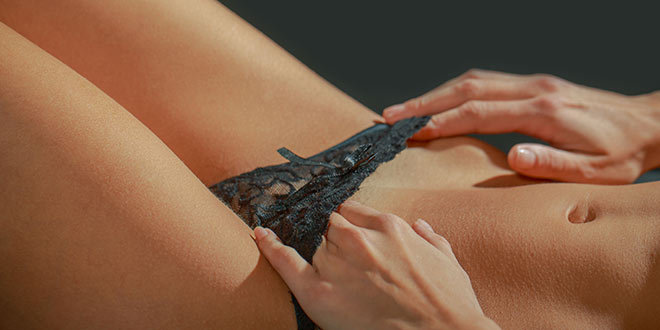 For many, the word ‘ejaculation’ is often associated with men. We know that when a man achieves orgasm, he releases semen (ejaculates). But when it comes to female ejaculation, things become a bit more controversial.

You see, many people doubt that it’s a real thing. And even those who do believe in the ability for women to ejaculate, they’re left scratching their heads, wondering how on earth it’s even possible.

What scientist have found however, you’ll be interested to learn.

What is Female Ejaculation?

During sex, a woman has the ability to release fluid from the group of glands found in the tissue around her urethra (the urethra is a tube that carries urine from a woman’s bladder to the outside of the body). These glands are called paraurethral glands.

These glands have been dubbed ‘the female prostate’ as it produces fluid (just like the prostate in a man).

The amount of fluid varies, and in fact, there are two types of fluid that’s expelled during sexual arousal/orgasm.

The Two Types of Fluid Expelled During Sexual Arousal

As found during a study on female ejaculation by Rubio-Casillas and Jannini EA in 2011:

Female Ejaculation: This is a milky-white thickish fluid that is biochemically comparable to components of male semen, such as prostate-specific antigen (PSA). It comes from the female prostate (which is around 5 centimeters), and one milliliter of fluid is expelled during female ejaculation.

What Fluid is Released During Female Ejaculation?

For the duration of a decade (1990 – 2000), researchers in Slovakia, Milan Zaviačič and his colleagues at Comenius University School of Medicine, studied the paraurethral glands.

More specifically, they did a number of microscopic tests on the Skene’s gland – two paraurethral glands that are responsible for female ejaculation.

They found that women produce PSA, like their male counterparts, and that they have tissue that is similar to the male prostate. They also learned that the enzymes found in the male prostate, can also be found in a woman’s Skene’s gland.

Another interesting correlation, is that both men and women’s PSA levels rise when they have cancer. For men, it rises during prostate cancer, and for women, during cancer of the Skene’s gland.

Not just that, but the cells that form in a man when he has a tumor in his prostate are very similar to those that appear in a woman when she develops a tumor in her Skene’s gland.

The conclusion of the study was that the Skene’s gland is actually the female prostate. The researchers too concluded that the fluid that is expelled during female ejaculation, is very similar to that of semen.

What’s interesting about the latter finding, is that only 10 to 50 percent of women experience ejaculation.

The big question here is, If this fluid is similar to that of semen, and it comes from the prostate, why don’t all women ejaculation when sexually aroused?

A possible answer could be that, for some women, the fluid doesn’t exit the body. Instead, it makes its way to the bladder, where it is then expelled during urination.

This was proven during a study by Amy Gilliland at the University of Wisconsin. She studied 233 women and found that those who did not ejaculate, had higher levels of PSA in their urine after orgasm.

But first, it’s important to know that there’s a constant debate going on about whether all women can squirt with direction and practice.

According to French gynecologist and sex researcher, Dr. Samuel Salama, it is completely possible for all women to squirt, as he believes that there is no anatomical predisposition required.

He also goes on to talk about the two different kinds of squirters:

The Dependent: This is a woman who needs bladder and G-spot stimulation in order to squirt.

The Autonomous: This is a woman who can squirt naturally, without even trying.

Other experts and sex-enthusiasts however, are certain that not every woman can squirt. But there isn’t enough scientific evidence to prove either claim.

So, conveniently, here’s a step-by-step guide on how to squirt! Give it a try if you fancy and see what happens!

A Step-by-Step Guide on How to Squirt

Step One: Get yourself in the mood by rubbing the clitoris. That will not only bring about sexual arousal, but will also allow blood to flow to the genitals.

Take your time, it’s not a race but a fun adventure and a new way in which to get in-touch with your body.

Step Two: Move focus from the clitoris to the G-spot. How? Place your ring and middle finger inside the vagina until you reach an area that feels slightly raised and bumpy. This is the G-spot, erectile tissue that surrounds the urethra, and it’s found along the front wall of the vagina.

Hint: You may want to use lube for this, to aid in comfort and ease.

By rubbing your G-spot, you’re essentially moving your urethra so that it’s at a different angle to the bladder. In this way, fluid can be expelled easier.

For that reason, you may want to use a G-spot stimulator sex toy that can attend to your hard-to-reach places.