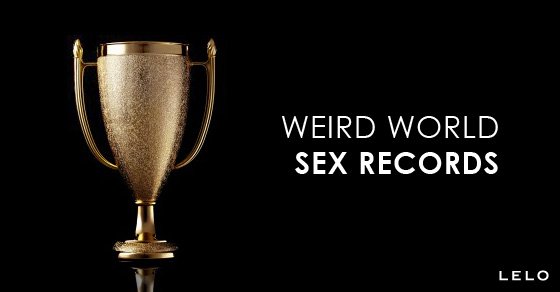 Sex is already a pretty weird and wonderful thing at the best of times. What with all those hormones, emotions and health benefits, not to mention the, ahem, ins and outs of the whole business, it’s a pretty wild ride.

And let’s face it, if your genitalia, conquests or ability to orgasm make you a sexual record-breaker, who wouldn’t want to shout about it? Before you answer, here’s a lowdown of just some of the world records we’ve unearthed…

Does size matter? Experience tells us no, and we just hope the owner of the world’s smallest penis on record – a diminutive 0.39 inches (0.9cms) – reports the same findings.

At the other end of the spectrum you’ve got American actor, Jonah Falcon. Not only has his 13.5 inch (34.9cms) manhood piqued the interest of adult film makers, it also apparently once caused a security alert at San Francisco airport. Suspicious package? Weapon of mass distraction? That’s a secret for Mr. Falcon, his lovers and airport personnel.

World record-breaking body parts aren’t confined to the gents, and there are more than a few women out there endowed with above-average assets, both upstairs and downstairs.

Take Tatiata Kozhevnikova and her astonishing Kegels of steel. In 2009 and at age 42, she broke her own record by lifting a weight of 31 pounds (14kgs) with her vaginal muscles alone. The fact she’d apparently been training for 15 years not only makes the Russian a poster girl for pelvic floor exercises, but also begs the question: why?

All in all, it would seem some are born great, some achieve greatness and some have greatness thrust upon them. With that in mind meet Annie Hawkins-Turner. Going by the stage name Norma Stitz (try saying it out loud), the American’s cleavage is reputedly a heaving 102ZZZ, making those puppies the world’s largest natural breasts.

On the silicone side of mammary matters, the equally fabulously-named Maxi Mounds claims the record for world’s biggest surgically-enhanced set, wearing, Guinness Book of Records tells us, a US size 42M bra.
Two words: back ache.

2. Most Sexual Partners in 24 Hours

Romantics at heart, we’d be remiss not to mention here the world’s longest smooch. That particular crown goes to Thai couple Ekkachai and Laksana Tiranarat who locked lips for 58 hours, 35 minutes and 58 seconds during a Valentine’s Day ‘Kissathon’. Awwww!

Despite a fair few hoaxes and even more speculation, it’s thought to never have been done, leaving the door wide open for any budding and amorous astronauts out there. Admittedly, a distinct lack of gravity poses problems, but when it comes to giant steps for mankind, science is going to have to figure out a way eventually, right?

They say there’s nowt as queer as folk, and it seems that’s particularly true when it comes to sex. More than anything, though, what experience and our cache of world-record holders tells us is that superlatives aside, sex, desire and love are mysterious enough, already prompting all kinds of craziness. Got your own story of superhuman achievements?