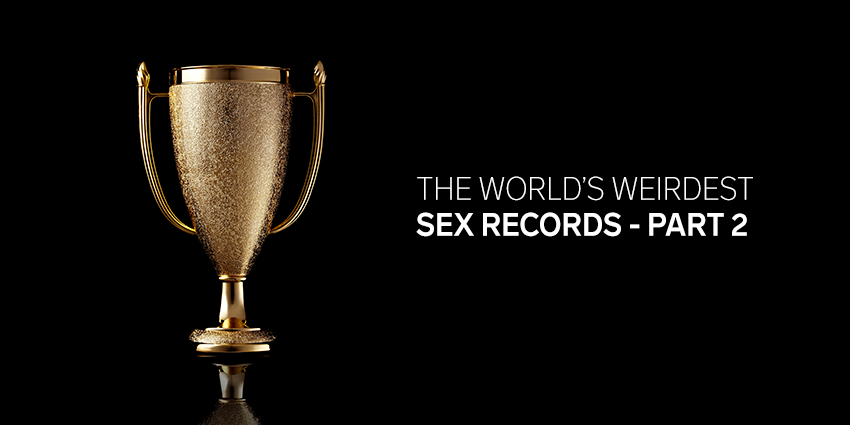 This is the sequel to a previous article about weird world records of sex — because of course there are more!

The world is absolutely chockablock with sex acts that, while valid, still go beyond the pale of what most of polite society will find themselves engaging in. This extends to cultural aspects, as there are bizarre sex practises to be found all over the world.

Longer than a Limo: Furthest Ejaculation.

Mr. Horst Schultz is probably a wonderful man with a family. Maybe he gives to charity and is well-liked by his peers. We shall never know these things. The legacy of Mister Schultz, by way of a Google search, extends to his world-record ejaculation.

Horst’s world record for the furthest ejaculation is a whopping 6 meters (18ft, 9in.) — longer than a stretch limousine!

Honorable Mention also goes to Horst, as that far-reaching ejaculate is also the fastest. Horst’s emissions reached a top speed of 42.7 mph (68.7 km/h) which is, incidentally, faster than the acceleration of a stretch limo. Way to go, Horst!

Check this out: How Can Men Last Longer in Bed?

Most Orgasms in One Hour

How many orgasms have you had in an hour? Two at the very most? Well let me tell you; doctors from the Center for Marital and Sexual Studies in California have recorded the case of one woman who enjoyed — or endured, rather — 134 orgasms over the course of an hour. The record holder for males? Just 16.

Honorable Mention: the official longest orgasm was recorded in 1966, when a woman had a 45-second orgasm that involved 25 individual contractions.

Check this out: Want to Have Multiple Orgasms? Here’s an Expert’s Advice

After retiring from his job as a travel agent at the age of 60, Shigeo Tokuda found something else to fill his suddenly empty schedule: pornography. Now in his 80s, he has starred in more than 350 adult films — and all without his wife of 45 years knowing about it!

Honorable Mention: Fujiko Ado, a frequent scene partner of Tokuda’s who is just few years younger than him.

Check this out: Senior Sex: Maintaining a Great Sex Life After 50 & 60 Years Old

Woman Who Birthed the Most Kids

You’d be forgiven for assuming that there was nothing much to do with your time in 18th Century Russia. If you were Mrs. Valentina Vassilyeva, you filled up your time by having as many kids as you can — 69, to be more precise.

That 69-baby total consisted of 16 pairs of twins, 7 sets of triplets and 4 sets of quadruplets, plus lots of individual babies too (single serve babies?).

Honorable Mention goes to the most prolific living mother, Leontina Albina from Chile, who has 64 children. She’s now in her sixties and lives in San Antonio.

Man Who Fathered the Most Children

69 kids is a lot of kids, to be sure. However Mrs. Vassilyeva’s pregnancy prowess pales in comparison to the multiplying might of Moulay Ismaïl Ibn Sharif, king of Morocco between 1672–1727. Over his lifespan, he fathered at least 1,014 children — probably many more however. How did he find the time to do royal stuff, like sitting in thrones and cutting ribbons?

Honorable Mention: according to modern DNA mapping, it appears that Ghengis Khan has upwards of 16 million living male descendants, meaning he must have fathered a similar number as Ismaïl.

No, we aren’t talking about the collection of penises in [INSERT LOCAL GOVERNMENT HEADQUARTERS]! We’re referring to the huge collection of dongs that are on display at the Icelandic Phallological Museum in Reykjavik, Iceland. Lining its shelves are 300 penises, including one that once belonged to a human. No, we don’t know where they got it from and we’re not asking.

First Couple to be Shown in Bed Together on TV

The first couple to ever be shown together in bed on American television was Fred and Wilma Flintstone of The Flintstones in 1960. We don’t know if they had a gay old time, but you can be sure that they made the bed rock (I am so, so sorry).

The First Man to Give Birth

Born Tracy LaGondino, Thomas Beatie gave birth to his first child in 2007 after having undergone gender-realignment treatments and surgery back in 2002. His wife was infertile, so he decided to keep his female reproductive organs and went through an artificial insemination in order to get pregnant. He has since given birth to 3 kids — the first legally registered male to give birth.

Honorable Mention: The longest gap between a first twin and second twin being born is 87 days.

Nature’s largest penis belongs to the blue whale, with about eight feet in average length and one foot of girthy circumference. If we’re talking about penis size relative to body size, the Argentine Blue-Bill Duck has the largest penis at 14 inches (35.56 cm). It’s worth noting that the Blue-Bill is a normal-sized duck, and you’re welcome for the hilarious mental image.

Honorable Mention: when it comes to primates, who has the biggest penis (and two opposable thumbs)? THIS GUY! Humans have the largest penises, relatively and actually, compared to all primates. Take that, monkeys!

Check this out: Can You Make Your Penis Bigger?

Okay, we had to throw in a few more because they were that jaw-dropping.

Ever gotten a noise complaint from the neighbors? Now imagine getting 311 of them for having loud sex. A couple in NYC garnered such a feat for their late-night antics, where the sounds could be heard from all six floors of the apartment building. To add to the spontaneity, the couple met in the apartment building, she as a resident and he as a handyman. They have been getting it on for over 5 years.

Check this out: The Science of Sex Sounds

Anyone else wondering what positions they’re doing?

Did you know that Sir Isaac Newton died a virgin at age 84? Still not anywhere near the oldest virgin. Not even Mother Teresa, who died a virgin at 87. The reigning champion for the World’s Oldest Virgin belongs to Clara Meadmore, who died in 2011 at age 108. She was a secretary in her homeland of the UK, and regardless of your sexual secretary fantasies, Clara decided at age 12 that she never wanted to get married or have sex.

Ninety-three queefs in one minute. Don’t believe us? It’s no shocker that this was recorded on the Howard Stern show. The Queef Queen’s name is Abby, who impressively flatulates an average of three queefs per second. We have just as many questions as you do about this one, but one thing’s for sure, next time you accidentally queef, you won’t feel as embarrassed. You could even bring up this fun fact.

Check this out: The Average Length of Sex

Which record are you looking to break?