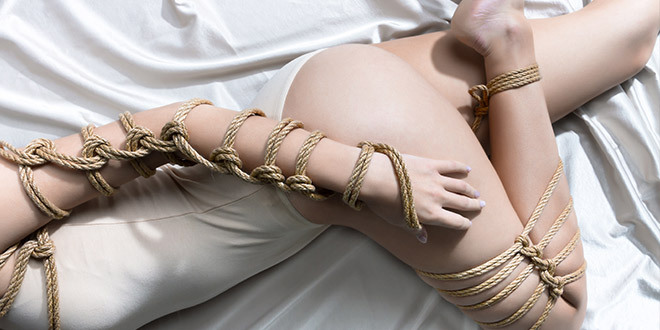 Love, as we perceive it, is a chemical reaction. It’s a feeling, something that can be tangible in the form of a hug, a kiss, a smile, or the presence of sincerity in someone’s eyes.

But who are we to judge what love personally means to an individual? How can we label one act as a form of love and affection, while shaking our heads at less mainstream manners of adoration? 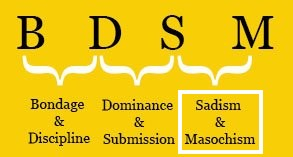 I’m going to expand and move outside of the box that says that love needs to be shown in a certain way in order to be true and authentic.

Welcome to the world of expressing love through acts of S&M.

It’s a relationship, a power dynamic, and an intense dance of sensuality, trust, respect, kink, and other cravings that has the ability to bring two people closer together.

Embracing S&M is not merely a physical act, it goes far beyond that. And in actuality, those who engage in S&M practices are just as loving, affectionate, kind, and in love as those who don’t—some even more so.

It looks just like any other relationship, bluntly put. Just as you would see a friendly face in a grocery store or a helpful employee at your local coffee shop, it would be impossible and stereotypical to assume what an individual wants, experiences, or desires when in a relationship.

In fact, there’s evidence that shows that many of those who enjoy and engage in these kinds of practices are mentally healthy in every respect. They simply do not gain any or as much arousal from mainstream vanilla sex as they do from other more intense experiences with a partner.

And within the confinements of S&M relationships, there is deep-rooted affection, love, and respect. In fact, one of the main components of this kind of sexual practice, is trust.

How so? Well, you wouldn’t willingly give up all control to someone you did not trust, would you? To be placed in a compromising situation that is consensual alone is a mere indication of unhindered trust.

But does trust equal love? Not always, of course, as these are two different things. But trusting someone completely is one of the healthiest ways to be in love.

So, I pose the question: how can love be expressed through S&M?

How Can Love Be Expressed Through S&M?

S&M in the bedroom is not about whipping out the whips and going to town…it’s a lifestyle. And the majority of those who engage in this kind of sexual behaviour have set clear and respectful boundaries beforehand.

These boundaries often come in the form of formal or informal consent. It’s comprised, loosely, of what the sadist is allowed to do, what the masochist feels comfortable with, a chosen safe word, as well as the discussion of materials used and sexual acts performed.

Together, these two individuals work as a team to create a pleasing, sexually-charged, arousing, and satisfying experience. One where both feel comfortable, and both receive the stimulation and desires that they crave.

And when it comes to S&M aftercare, individuals will display their more gentle, caring, protective, and nurturing side. In fact, the aftercare could quite possibly be considered one of the most important aspects in an S&M relationship, as it brings two people closer together, caressing in a safe space.

Aftercare can take shape by talking, cuddling, embracing, and giving affection. It can also be showering together, a ritual of packing away toys and props, and giving each other undivided time and attention.

This time has proven to be exceedingly healthy for couples, especially women, as after sexual activity, they have the capacity to feel undesired and discarded due to their hormonal changes.

Oftentimes, in vanilla sexual encounters and one-night-stands, there is no aftercare such as cuddling or talking. Which is why the power dynamic of an S&M relationship is one that could possibly surpass mainstream vanilla sex when it comes to respect and experiencing feelings of warmth, affection, and safety.

S&M: A Healer for Broken Relationships

As counterintuitive as it may seem to some, some sex therapists actually recommend the practice of S&M to couples who are facing relationship difficulties. One particular sex therapist, Dr. Stephanie Hunter Jones, even admits that “it definitely makes a difference for damaged relationships”. This is particularly true for those who feel as though they’re more in a position of weakness or power than their partner.

For some, one individual may be very dominant towards the other in general, causing a power imbalance. Introducing the opposite roles in the bedroom, that is the more submissive partner becomes the dominant, can restore that balance and resolve control issues.

From a different perspective, if one partner has endured a bad sexual experience in the past, allowing them to take control can be a healthy way to regain confidence and to work through their trauma.

For anyone in an S&M relationship, the driving force is reaching a mutual consent without the intent to negatively hurt themselves or others. In this way, there is little to no harm in trying or enjoying this kind of practice.

And to conclude, I encourage everyone to be open-minded and explorative. I, for one, am somewhat pleased that S&M has been made more prevalent in the mainstream media, as it’s opened up the possibility of a discussion, education, and experimentation.

S&M in the Mainstream Media

As little as 10 years ago, S&M—while perhaps being prevalent in some pornographic material—was seen as more of a taboo, strange, and somewhat unheard of. And while the whole ‘free love’ thing was ‘a thing’ in the 60’s, it is of late that these kinds of sexual practices are deemed more normalised. This is largely due to exposure in the mainstream media.

When E.L. James published her first book of the series, 50 Shades of Grey, with an accompanying film being released soon after, the world was intrigued. People were introduced to a new kind of way to enjoy and think about sexual activity. And even those who were repulsed or unapproving of this kind of lifestyle were educated and made more aware.

Sure, the novel may not have always accurately portrayed a realistic image of an S&M lifestyle, but it still took the world by storm…

The same goes for the song by Rhianna, Come On which was actually first named, S&M, but had to undergo a name change after it was called a tune with “strong content” on various radio stations.

With lyrics such as “Now the pain is for pleasure ‘cause nothing can measure,” and “chains and whips excite me,” a light was turned on worldwide, with fans singing the lyrics blissfully.

So, I reiterate, as long as two people have mutual trust, respect, adoration, and the right kind of information after doing their own research, an S&M relationship can, and oftentimes does, equal love.