Review: The LELO ENIGMA is, Well… a Mind-Blowing Enigma!

For years, I believed that my orgasms were fantastic, earth-shattering, amazing… the best they’d ever get! Boy was I wrong! I actually didn’t know that my body was capable of producing such a ludicrous amount of euphoria until I tried using dual stimulation sex toys.

You see, for the longest time, I wasn’t interested in penetrative toys (or many sexual acts that included penetration, to be honest). My go-to had always been clit massagers and suction vibes. Truth? I actually own not one, but two LELO SONA sex toys.

Then, a few weeks later, I received the majestic ENIGMA in the mail. I will admit I was feeling rather down that day, so receiving it did bring a touch of joy to my somewhat depressive demeanor. I couldn’t not try it, even though I wasn’t all that aroused. So, I unboxed this sheer beauty, charged it, and was ready to play.

The LELO ENIGMA: My Initial Thoughts

This dual vibe was different to the one I had previously used. It’s more flexible, and there’s always a learning curve when using a new toy. I fumbled a tad, wondering if I had actually inserted it correctly. But at the same time, the clit sucker sat in the perfect position: directly over my clit. So, I decided that I was indeed using the toy the right way, and persisted to play with the settings.

What I found interesting was the fact that the vibrational patterns that got my pulse racing with the ENIGMA were not the same as the ones that got me going with the SONA 2 Cruise. Fair enough, variety is the spice of life! I’ll admit, it did take me some time to reach climax the first time around. I think this had to do with the learning curve and my moody disposition. 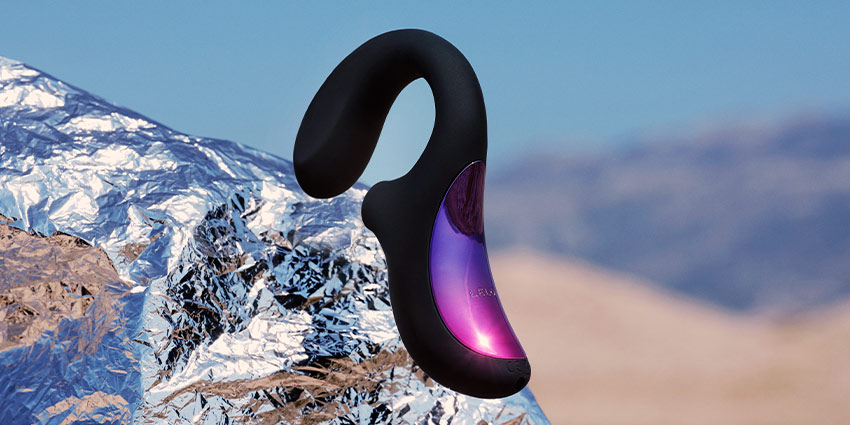 The LELO ENIGMA: Round Two

On a sunnier day, literally and figuratively, I grabbed my shiny new toy out once again to take it for a spin. It was a lot easier to navigate, and I began exploring the various vibration patterns. Mind you, I had not even increased the intensity one bit before I escaped into a luscious and dreamy climax. I thought, “There has to be some kind of magic involved here that I was getting off sans an increase in intensity!”

My climax was blissful, yes! I enjoy playing with the settings, seeing what this piece of art was capable of, and of course experiencing the rush of endorphins that came with it. But quite honestly… it wasn’t until the third time that I really witnessed what the ENIGMA was capable of…

I wish I could write this in more detail, but quite honestly… I was lost in the moment. I can barely remember the moments leading up to my most gorgeous orgasm! All I can remember is grabbing my pillow, burying my face in it as I writhed in pure pleasure and lust.

And when that magical moment of climax arrived, which lasted longer than almost all of my orgasms I’ve ever had, well… I was blown away.

All I can say is: the decision I made to go on this sexual exploration (aka trying new kinds of toys, like dual vibrators) was the best I’ve ever made. I’m still so in awe of what my body is capable of with toys like the LELO ENIGMA, and love the fact that I’m learning about new heights of pleasure.

Final Thoughts: Is the LELO ENIGMA Worth It?

My advice? This marvel is worth it. The only drawback, in my opinion, is that there is only one control for both the clit suction and the G-spot arm. Independent motor functions would have been an added bonus for me.

My final thoughts? Even if you’re not much of a dual vibe or penetrative toy kind of person, take it for a spin, give it a whirl or two (or in my case, three). I’m sure you’ll be just as amazed to realise that your body is even more gorgeously magical than you thought!