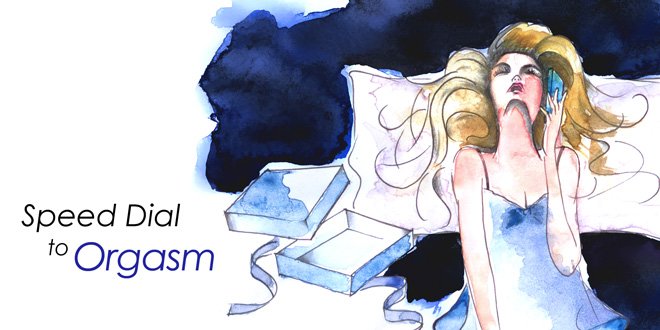 His text messages lit up her phone all day, becoming increasingly more explicit and endlessly provocative. It kept her flushed and distracted through every business meeting, making working on her birthday infinitely more bearable. She secretly responded to his messages during her breaks, as a palpable level of anticipation settled over both of them.

‘Tonight, tonight…’  he continued to tease. ‘I’ll be there even though I can’t.’

Their long distance relationship had its challenges and complications. They were both tied to intense work schedules that kept them on opposite coasts for months at a time. Despite this, he had ways of making her blood run hot and she was intrigued by his suggestion of a special surprise.

By the time she arrived home later that night, the little parcel he’d sent in the mail was waiting for her, just as he’d promised.

She set it on her bedside table and dialed his number.

Her pulse quickened as she unwrapped the gift. Inside the box she found a sleek midnight blue object, inlayed with platinum curves. It was exceptionally smooth to the touch as she picked it up to hold in her hand.

There was no instruction manual and when she asked, he told her that it was still with him, and that there were rules to be followed. He would explain exactly what to do and when, and she was reminded that a good birthday girl should always obey if she expected to get her reward. Just the tone of his voice left her wet and wanting. Of course, she agreed to his game.

First, he instructed her to slowly undress, verbally guiding her fingers over her skin. She imagined him there with her, his hands on her, sliding between her breasts and down her taut belly, hooking into the lace band of her panties and slipping them down over her thighs. Next, he had her lay down.

“Spread those legs and imagine me there, leaning over you, my tongue pushing past your lips. You feel my mouth warming your skin as I lick my way along every pretty curve, slowly going down your body, dipping into that delicious hollow just below your hip bone.”

He could hear her breathing quicken, giving way to softer sighs, as her imagination took over.

Under his guidance, she slipped her fingers through the center of the little blue object he’d sent her, hooking them around the slimmer side of its round curves. She nestled it against her sweet spot, feeling it swell in response.

“Now press that button and imagine my face buried between your thighs,” he said.

The toy surged to life. She felt a combination of circular strokes and fast flicks, creating intense rhythmic sensations. It mimicked the seductive swirls of his tongue, gliding over and around her clitoris. She could almost feel him there, his tongue expertly working her most intimate places.

He whispered dirty things into her ear as he guided her though each stimulation pattern, creating different oral movements in both full and half circles. The range of vibrations kept her on the edge, tempting and teasing her.

When he spoke next, his voice was urgent and low, undeniably aroused by her excitement.

“I want you to come for me, birthday girl.”

Her moans fuelled his desire for her. He imagined her lying there, voluptuous and naked, her hand between her thighs as it continued swirling and stroking in placement of his tongue, bringing her to new peaks of pleasure. Her climax was like music to his ears, lusty and unbridled. The heat between them continued to rise.

Though separated by distance, their connection on that special night was complete.