Sit Pretty, How to Facesit for Ultimate Pleasure

In a world where fetishes and kinks such as capnolagnia (a smoking fetish), and cuckolding (being sexual aroused by seeing your partner with another person) exist, facesitting is actually one of the easier ones to decipher.

And if you haven’t figured it out as yet – this fetish is literally when someone sits on someone else’s face for sexual pleasure (most commonly, a woman sitting on a man’s face).

The face is then in contact with their partner’s genitals or anus, and either oral sex* or face grinding ensues. Sounds like quite the party, right?

So, today you’ll have the opportunity to learn all about:

So, are you ready to enter the wonderful world of facesitting? Sit pretty…

How to Facesit Without the Fear of ‘Squishing’ Your Partner

There are a heck of a lot of people out there who are intrigued by facesitting, but have a fear that they may hurt or squish their partner in the process. But even for plus-size queens, this really isn’t going to be an issue . . .

The trick is not to put your weight on your partner’s face. How do you do that?

Step one: If you’re wanting to go slow to get a taste of the hype, you can start by getting into a kneeling position over his chest. Allow your weight to fall on your legs, not him. Give his chest a little straddle to see how it feels. If it’s peaked your interest, move onto step two.

Step two: Position yourself so that your thighs are on either side of his head, and you’re faced towards the top half of his body.

For the most comfortable result, allow yourself to be close to the headboard of the bed or the wall. That way, you can grab onto it to shift some of the weight, and to gain good balance. He can have his hands either on you or at his side.

Step three: Lower your body so that your genitals make contact with his face/mouth. At your speed, grind, twirl, and dance while he licks you!

Additional Tips for Plus Size Facesitting

For your pleasure, you could consider enjoying your facesitting tryst on a harder surface, such as the floor or a firm ottoman, as opposed to a memory foam mattress which may cause sinking.

You could also have your partner use a pillow to prop up their neck, making it more comfortable for them.

And lastly, there’s actually a contraption that’s been created to ensure successful facesitting. You can invest in a nifty little piece of furniture, called a queening chair, that’ll definitely take you to new heights…

The 21st century really is thriving, is it not?

Have you ever heard of a queening chair? It’s a fancy little invention made solely for your facesitting pleasure.

A queening chair is a foldable chair that can be adjusted by height. It has arm rests for balance, and a soft space for your knees.

It can hold up to 300 pounds, making it not only a comfortable option for those who are apprehensive about their weight, but also those who feel nervous in general or who want to enhance their facesitting experience.

This can be anything from using sex toys, such as handcuffs, riding crops, and blindfolds, to a submissive undergoing sexual or menial tasks for their dominant. And facesitting is yet another aspect that highlights a power play between partners.

When one is straddling someone’s face, they’re imposing a kind of physical restraint for their sittee while having some influence over their movement.

Additionally, during facesitting, the bottom (usually) doesn’t receive any oral pleasure, which makes his genitals the least important.

Despite coming a long way, sexist gender roles are still very much ingrained in today’s society. For example, many still believe that boys should wear blue and girls should wear pink, and men should provide for their family and women should be childcarers.

But as we continue to progress further into gender equality, there have been a number of initiatives and protests that shine light on these dysfunctions. And an excellent example of how women are now starting to take charge, is facesitting.

As mentioned above, when a woman is sitting on a man’s face, the man is physically compromised. The woman’s sexual needs come first, and she is able to manipulate her body to gain pleasure from her partner.

Another example of females rising to power, is a recent campaign by Reebok in Russia. On February, 7th 2019, an ad was released showing female wrestling champion, Anzhelika Pilyaeva, standing proudly with her hands on her hips. Surrounding her, the words:  “Don’t sit around waiting for a man’s approval — sit on a man’s face.” (image credit) 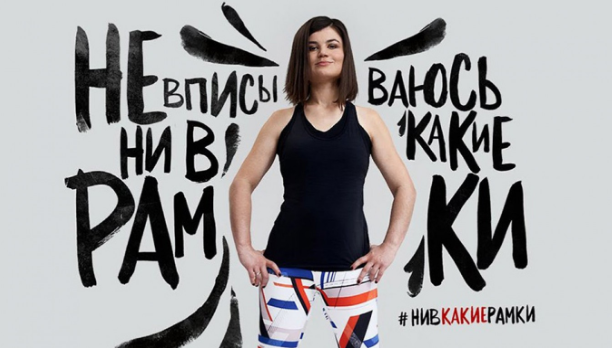 And while this campaign has since been retracted, it does pose an important discussion. Sure, the slogan could be considered vulgar, but in no way is it an insult to men or women. The ad was merely created to highlight the flaws in Russian culture – that is, that many women are still constantly seeking a man’s approval.

In a statement made by the marketing director of Reebok in Russia, Alexander Golofast, he said:

“‘Don’t sit around waiting for a man’s approval – sit on a man’s face’ is not a quote about violence. It is a quote about achieving a mutual level of pleasure, between both a woman and her partner. We’re not referring to degrading men here, but instead encouraging everyone to loosen up a bit and fight stereotypes alongside strong women.”

Many argue that this campaign was retracted because Russian society is not yet ready to feel the emotions and underlying message attached to it. This highlights the lack of women empowerment and understanding when it comes to feminism.

One protester, named Mistress Absolute, was quoted, “I felt that this was the beginning of something to creep into my sexual freedom and sexual preferences. This is a gateway to other laws being snuck in.”

And so it is. The banning of this sexual act indeed does pose a larger issue that is, society wanting to focus on heteronormative sexual practices.

Are Men Turned On By Facesitting?

On a more positive note, it appears that many men really are turned on by the act of facesitting. This could be for a number of reasons:

The general consensus? Yes! For many women, facesitting is not only a means to feel more powerful and in control, but also provides them with different sensations that aren’t felt (as much) during other sexual acts.

And so, the women of Reddit have revealed the reasons why they love to facesit:

Are you a woman that loves to facesit? Use these techniques, tips and tricks to enhance your experience and you’ll be rewarded with ultimate pleasure, excitement, and lovely orgasms. Sit pretty, and enjoy!