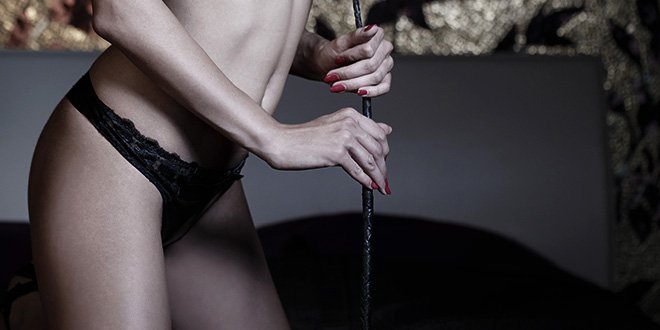 Aftercare: The time you and your partner take after play to recover and also to see to each other’s emotional and physical needs. There are several ways to administer aftercare and some people might need more or less than another.

Blindfold: A blindfold is an implement used to partially or completely obstruct someone’s sight so as to heighten their other senses.

Bondage: The enjoyment or sexual gratification through the act of being restrained.

Bottom: Someone who receives physical stimulation in a scene from a Top.

D/s: Shorthand for Dominant and submissive.

Dominant (Dom/Domme): A person who exercises control in a scene. When it’s written, it is capitalized and usually gendered, ‘Dom’ referring to a male and ‘Domme’ referring to a female Dominant.

Flogger: A flogger is a device used to whip or gently tease the skin of someone during play, made of several strands attached to a stiff handle.

Golden Showers: Showering someone with your love in an unconventional way, with piss.

Hogtie: A bondage position that involves securing the ankles to the wrists with handcuffs, ropes or ties behind someone’s back to immobilize them.

Knife Play: Knife play involves arousing your partner with a sharp edge. Make sure, of course, that if you’re engaging in knife play it’s with someone who trust whole-heartedly, and always take safety precautions even if it’s just for psychological excitement.

Masochist: A masochist is someone who enjoys receiving physical pain or emotional humiliation during consensual sex play. Not all masochists are submissive, nor are all submissives masochist.

Nipple Clamps: Nipples clamps are a type of sex toy that pinch and squeeze the erect nipple for a mixed sensation of pain and pleasure.

ProDom/ProDomme: A portmanteau of ‘professional’ and ‘Dominant,’ this refers to someone whose job is to dominant submissive clients of either sex in exchange for money.

Pony Play: This is a type of D/s play where the Dominant plays the owner or trainer of their submissive, who let their partner ride on their back, or may wear bridles, bits, or harnesses to create a specific look. Sometimes tails and whips are incorporated into this play.

Pup Play: Pup play is a type of D/s relationship where the Dominant is very caring of their submissive, but will expect obedience from their sub, and their play may incorporate leashes and collars.

Role Play: Sexual role playing involves taking on a character to play (sometimes with costumes) to indulge in fantasy with your partner.

Sadist: A sadist is someone who gets sexually aroused by causing pain or humiliation to their consenting partner, and usually (but not always) takes a Dominant role in a D/s relationship.

Safeword: A safeword is a pre-agreed upon word or phrase used by both Dominants and submissives to stop or slow down play when they become uncomfortable.

Soft Limits: A soft limit is different than a hard limit in that it is flexible; something that a Dominant or submissive may not be comfortable with when first negotiated but might change after they become comfortable with each other, or only in specific circumstances or situations.

Submissive: A submissive (usually written in lower case letters) is someone who enjoys and will willingly give up some or all control to a Dominant partner.

Subspace: Subspace is a mental state that can be described as similar to getting ‘sucked in’ to a movie or book and is brought on and experienced both physiologically and psychologically. Physiologically, it follows the rush of endorphins and other chemicals from sensations like spanking, and psychologically it manifests when you are drawn to a Dom. This can be a very euphoric feeling that may be followed by a ‘drop,’ which is why aftercare is quite important.

Switch: A switch is someone who will participate in kink as both a Dominant and a submissive, sometimes only taking a certain role with certain partners, or switching within the same relationship so that each person can get both experiences.

Teaser: Sometimes called a ‘tickler,’ this is a toy used in sensation play that uses soft feathers to give light, gentle sensations.

Temperature Play: Temperature play is a type of sensation play that uses warm and cold objects to stimulate the skin.

Top: A top is someone who gives rather than receives sensation during play.

Topspace: Less talked about than subspace, topspace is a similar altered state during a scene, but is often described as becoming hyper-focused on their submissive rather than a feeling of letting go.

Vanilla: An adjective use to describe people who are not interested in kinky sex, or to describe non-kinky sex. What might seem vanilla for one person may be kinky for another.