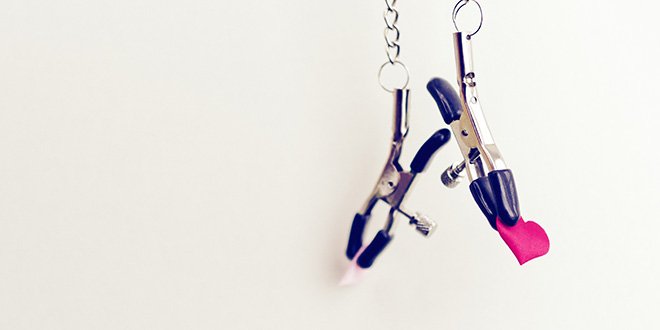 What Exactly Are Nipple Clamps?

What are Nipple Clamps?

Nipple clamps are a sex toy that squeeze your erect nipples to restrict the blood flow. Because nipples are a sensitive erogenous zone for men and women, the pinching sensation can give anyone a fun blend of pain and pleasure. They come in a range of designs, from alligator, butterfly or clover, and some have adjustable pressures. It’s best to speak with a professional in a sex toy store about the different intensities, and where best to start out. Think of it as retail therapy meets foreplay!

How Can You Use Nipple Clamps During Sex?

They can also be an great focal point for foreplay – when you’re wearing nipple clamps, you’ll be extra sensitive to touch and even temperature. Try lightly putting ice on the wearer’s nipples and blowing softy.

Can You Use Something Else in a Pinch?

While we’re normally all about being inventive when it comes to using things around the house for DIY sex toys and accessories, nipples are quite sensitive and you should be wary about sticking any old pinching object on them. Clothespins and chip clips may be far too tight a pinch, for example, as the point is to induce a little pain, not nerve damage.

To avoid nerve damage, any pinching object should not be left on for more than 20 minutes max, and it’s best for both partners to test any improvised nipple clamps on other parts of their body (like an ear lobe of the webbing of your fingers) to get a sense of what they’re doling out. If you’re dead set on some DIY, we love these instructions for making nipple clamps out of chopsticks and rubber bands!